Shirdi Sai Baba, a personification of spiritual perfection and an epitome of compassion was regarded with great reverence by both Hindu and Muslim followers. It is said that when he departed, both Hindus and Muslims staked their claim to his mortal remains. When the dispute could not be resolved, they moved away after covering his body with a shroud, only to return next morning to find that the earthly body of the saint had disappeared. There were flowers under the shroud.

How does one bring the celebrated attributes of Sai into physical place? His devotees simplified this. They built temples and installed in them his physical form. But we had to create a meaningful space for meditation where, thinking of Sai, one could think of the absolute in peace and tranquillity.

Our search culminated in creating a space that, in its form, connects with Nature and gives it a solitarian touch; not static but with an unending movement, suggesting a journey in the mind towards God.

The circle is one form that is in perpetual motion, in a constant state of energy as the world is today. Inscribed in this circle is a static square – pure and well defined. The square within the circle transforms into a mandala. The meaning of mandala comes from Sanskrit meaning “circle”. Even though it may be dominated by square or triangles, a mandala has a concentric structure. Mandala indicated a balance of visual elements, symbolizing unity and harmony. The idea is to serve a tool in our spiritual journey as it symbolizes cosmic and psychic order.

The space between the square and the circle transforms itself into a garden of fragrance. At the periphery of the circle there are water bodies that silence the exterior and cool the breeze in its inward picks up the fragrance of the garden.

The structure in its third dimension does not express itself as an embodiment of any religion. A dome on top holds the central space. The extensions of the mandala cherish Sai at the far end, while the entrance and spaces around house other evolved beings. All these are held on the roof by conical pyramids.

The vibrant interior lets you fly while you remain still. Sai as a focus disappears as you begin your journey into peace and solitude, and allows you to move closer to the absolute. 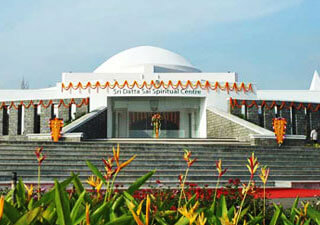